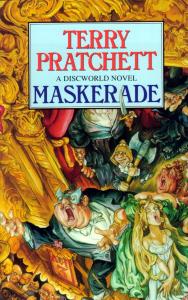 ‘A catastrophe curve, Mr Bucket, is what opera runs along. Opera happens because of a large number of things amazingly fails to go wrong, Mr Bucket. It works because of hatred and love and nerves. All the time. This isn’t cheese. This is opera. If you wanted a quiet retirement, Mr Bucket, you shouldn’t have bought the Opera House. You should have done something peaceful, like alligator dentistry.’

Something struck me part of the way through Maskerade that perhaps answers the slightly inconsistent nature of the past few Discworld novels. In Maskerade, Granny is bored, agitated and in need of a change. And it hit me that every novel since Lords and Ladies has been similar. Each has featured characters seeking a break from their old routines. Carrot wants to turn the Watch into something worthwhile in Men at Arms. Buddy wishes to save his soul by rock and roll in Soul Music. And Cohen is tired of raping and pillaging and wishes to settle down by running his own empire in Interesting Times.

You could argue that all narratives are quest stories, where the protagonist goes in search of something they need. I am also aware that authorial intent is probably the shakiest form of criticism. All I will say is that it is Interesting and Noteworthy that each of these novels has had someone searching for something more, something different. Then I’ll tap my nose and nod mysteriously.

After a few false starts (the lazy and drab Soul Music, the somewhat patronising Interesting Times), we are on a much surer footing here as the Lancre Witches are back. At this stage, the witches are so well formed as characters, Pratchett can almost wind them up and watch them progress through the plot. He has the same luck with the Watch. But he still needs a wider maze for them to stumble through.

In this case it’s The Opera House. Agnes, last seen as a minor character among the younger witches in Lords and Ladies, decides to seek her fortune as a singer at Ankh-Morpork’s finest establishment for the operatic arts. She’s determined to leave her dumpy real persona behind and be the sultry, alluring, exotic Perdita. Except she is deemed too big to be front and centre of the stage and is relegated to provide the voice for the much more physically appealing Christine (who is, of course, lacking in every other way).

Determined Agne..,I mean Perdita, is the missing link to their coven (after Magrat realised she was happy being Queen at the end of Lords and Ladies), Granny Weatherwax and Nanny Ogg descend upon Ankh-Morpork to offer her a job/wrestle her away from her dream. But with the opera house seemingly haunted and cast and crew being bumped off with dramatic aplomb by a ghostly murderer, our two elderly eldritches can’t help sticking their noses in.

I love this book. Maskerade is tremendously entertaining, moving the location of a classic English whodunit from a country house to an opera house. Similar to what JK Rowling would do with the early Harry Potter novels (and her own adult post-Potter fiction), Pratchett hanging the plot off the crime genre gives the book an incredibly solid structure. I’m not quite sure there is a lot to this book, compared to the more philosophical Small Gods or invention of the Watch novels, but it really doesn’t matter when the book barrels along with the melodramatic air of the very best of Victorian sensation fiction. It reminds me of the unabashed classic movie Clue in its giddy messing about with the crime genre and careering plot. It’s a classic page turner, where you are so relentlessly entertained as the identity of the murderer remains *just* tantalisingly out of reach, Nanny is crude and Granny is obnoxious. It’s a hoot.

It’s a delight for anyone with a passing familiarity with crime novels or Pratchett’s previous work. So our three suspects are Salzella, the second in command and therefore the most dangerous man in the novel, Andre, the mysterious organist, and Walter, the simple man-child who carries out odd-jobs around the opera house. In a neat twist that predated the horror classic Scream by several years, the ghost turns out to be two characters.

My opera knowledge is non-existent. The best I could do was realise there was more than a passing nod to The Phantom of the Opera, with Walter playing a central role. With his shambolic manner, he is like the classic comic character Frank Spencer, so brilliantly realised by Michael Crawford who went on to play the titular role in the Lloyd Webber classic(?) musical.

But knowing your librettoes from your libraries does not matter when a book is this good. If you look at why Moving Pictures and Maskerade worked and Soul Music didn’t, it’s because the references in the first two were a bonus to a plot that worked. All Soul Music had was its postmodern nods and that ultimately was not enough.

I hope you can forgive me the clumsy undergraduate theorising but given how Pratchett has borrowed liberally from Shakespeare in his former witches novels, I feel I can shoehorn in a Hamlet reference. But Maskerade takes Polonius’ “to thine own self be true” line and runs with it gleefully into the farcical. Practically every character tries to be something they are not, from the cheesemonger turned opera house owner to the promising witch turned opera singer. Most of the characters are using masks (literal or metaphorical) to hide away from who they really are. It is only the witches who know themselves, warts (sorry) and all.

(Undergraduate rambling over. I’ll try not to do it again)

But it’s Nanny Ogg, rather than Granny Weatherwax who is the real heroine of the novel. Because Granny has a mask of sorts herself, that of her arrogance, aloofness and sheer terrifying force of will. Until now, Nanny has been a crude foil to Granny. That’s by no means a criticism as she is a riotous character. But Maskerade belongs to her because she knows who she is, is happy with it and does the best she can, despite her flaws.

Nanny didn’t so much enter as insinuate herself; she had unconsciously taken a natural talent for liking people and developed it into an occult science. Granny Weatherwax did not doubt that her friend already knew the names, family histories, birthdays and favourite topics of conversation of half of the people here, and probably also the vital wedge that would cause them to open up.

Nanny Ogg has been hiding in plain sight as heroic all along because in Pratchett’s view, the truly good are those who use their gifts to help others, who use their knowledge in the real world, rather than shut themselves away. Nanny achieves things because of people, Granny does so in spite of them – or, sometimes, to spite them. A character I thought was the less nuanced funny gal to Granny’s straight woman is actually someone who realises her best friend is stuck in a rut and decides to place her as the author of a book of obscene cookery that Nanny herself writes. This is the barmy act that kickstarts the novel as Nanny knows Weatherwax will be so furious, she will wreak havoc in Ankh-Morpork to get her just desserts.

Gytha Ogg is the one who pieces together the mystery and how Salzella is trying to do a The Producers to the opera house and embezzle it into penury, so he can take it over himself. While the grand finale belongs to Granny Weatherwax (as if she would have it any other way), Nanny’s arc hearkens back to what The Wizards did in Moving Pictures. It’s fine to have all that knowledge but you need to use it in the real world, rather than your head.

After several novels of searching, Pratchett has hit something new with Maskerade and it’s easily his best book since Lords and Ladies. Crucially it’s also one that offers something slightly different than what we have read before. It’s one of my favourites – a romp in the great rollicking sense of the word, tremendously entertaining and interestingly marrying together style and substance, which may go against your preconceptions of opera.

It’s good to have the true Pratchett back.